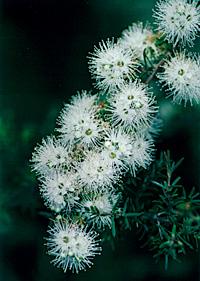 Major Chemical Constituents: The main components of the oil are alpha-pinene, cineole and globulol/viridiflorol.

Microbiological tests against various microbes have produced the following results:

The oil has been found to be effective against Staphylococcus aureus, Pseudomonas aeruginosa, E. coli and Candida albicans. The oil inhibits the growth of S. aureus at a concentration of 0.16% w/v. The neat oil was also found to achieve a kill rate against S. aureus of greater than 98% in 10 minutes and greater that 99.99% after a contact time of one hour.

This oil has been tested and prescribed by a number of therapists, nurses and pharmacists across Northern Tasmania, and it is from evidence from this professional and public use that the oil received the above TGA listing.

Anecdotal feedback from users of the oil have shown it to be helpful in the treatment of the following conditions: eczema, dermatitis, rash, undernail infections and leg ulcers, and most helpful for the treatment of chilblains. The oil also been found to eases the pain from insect bites, minor burns, recurring shingles and migraine headache. Other uses include as an insect repellent, a room deodoriser in a nursing home environment, inclusion in a topical bruise and inflammation preparation, for its effect in promoting rapid repair of soft tissue injuries, such as strains and sprains and for the control of persistent tinea.

Ethnobotany and Historical Use: Early pioneers and hunters noted that native animals often slept under this species, and concluded that they were infected by ticks and other mites, insects etc. from the bush, hence the common name of “Tick Bush”. Today, it is thought that the reverse is true, that native animals were in fact seeking relief from infestations by brushing against, sleeping or lying under this species.

The Oil: Consists mainly of mono and sesqui-terpenes and has strong dermal penetrating properties. The scent is pleasant, with clean, fresh invigoration undertones.

Cautions and Contraindications: This oil contains relatively low levels of cineole (around 15%) and should not cause skin irritations under normal usage. People who have used this oil in the treatment of gout have exhibited a healing rash as the uric acid is being excreted via the rash, the oil controls any itching present. People with sensitive skin are advised to do a patch test before using this oil. Spot application of the neat oil to insect bites, cuts, minor burns produces immediate pain relief.

Method of Application: Neat or diluted direct to skin surface, in a bath, aromatic profusion blend.

Personal experience: I came across this surprising oil while on holidays in Tasmania at the end of 1999. I purchased a bottle from a gift shop in Stanley on the windswept northern coastline of this beautiful island. The shopkeeper, spoke very highly of the oils healing properties. Later on this trip I used this oil to treat mosquito and sandfly bites to great effect. Since then I have used the oil in a number of respiratory and anti-inflammatory applications and have found the TGA registered claims to be well proven.